Is a Metric-Driven Headline Always the Best Choice for Your Customer Success Stories?

One of the golden rules of case study writing is to put an impressive metric into headlines instead of using qualitative descriptions of success.

So instead of saying:

“How [Customer A] beats back the competition with [Company B product/service],”

Of course, you won’t always have good metrics to worth with, which is a whole other topic.

But generally, the rule is to use good metrics in your headline when you have them.

And that rule probably holds 80% of the time.

But for the other 20% or so, you might have better options.

In this article, let’s look at two scenarios where we chose NOT to use hard numbers in our case study headline, even though we had them.

When available metrics won’t resonate with your target audience

Case Study Buddy writers know that every customer success story is directed to a particular audience.

They’re not casting the widest net possible in the hopes of getting followers or readers. Instead, they’re directing them to whichever audience our client wants to target, whether CFOs, CMOs, developers, engineers, or any other role you can think of.

And so, they craft stories in a way that will attract the target audience, provide them with value and encourage them to take the desired action.

Our writers craft stories to attract the right target audience, provide them with value, and encourage them to take the desired action.

But here’s the catch: Not every metric—no matter how impressive—will resonate with every target audience.

Some metrics, for some audiences, won’t be wholly relevant.

Let’s look at a recent example for a customer success story we created for Speedyrails and its client Bounce House.

I’ve circled the headline in blue:

As you can see, this headline doesn’t contain any metrics. Instead, our writer opted to go with a powerful client quote.

Why did she do that?

After all, if you look at the next page of the case study, you can see we actually had a great hero metric of 100+ hours saved to work with:

But here’s the thing: the audience for this case study is engineers—not CEOs or CFOs.

If the target audience was CEOs or CFOs, then our writer probably would have put the time-saved metric in the headline. After all, CEOs and CFOs care a lot about cost savings, time savings and the bottom line.

They want a good ROI for the decisions they make.

But in this case, the target audience was “developers and technical leaders of medium-sized businesses” (according to the client brief).

In other words, the people we’re trying to reach with this customer success story are engineers—specifically the heads of engineering teams.

And what do the heads of engineering teams care about?

While time savings is fine, what they really want to know is if Speedyrails can provide the support of a full development operations team or if they’ll need to hire someone internally.

THAT is the core pain point.

And so, in our headline, we address that pain point head on: “You don’t have to worry about DevOps with Speedyrails.”

Then we use the second part of the headline to describe what Speedyrails did: “How Bounce House migrated to AWS with Speedyrails.”

It’s clear. It’s succinct. And it gets right to the point for the designated target market.

And there’s no metric in sight…until you scan the sidebar on the second page or the results section where that awesome time saving metric is given its due.

When the story trumps the metrics

There’s another scenario where we might decide to not use a metric in a headline, even when we have some good ones.

Sometimes, a story is just so compelling, it’s more likely to catch the right eyeballs than any metric could.

Sometimes, a story is so compelling, it’s more likely to catch the right eyeballs than any metric possibly could.

For example, our client, Varonis, is a leader in data security and analytics.

Recently, they asked us to write a customer success story for them describing how they helped a customer (a major retail chain) stop a serious data breach.

(The customer asked to remain anonymous for reasons of security, and we’re happy to comply.)

Our writing team was blown away by the story. Not only did Varonis stop the data breach, they did it as the attack was happening!

The story was so unusual and powerful, our writer decided to make it the focus of the headline.

Here’s how it appears on the main page (I’ve circled the headline in blue): 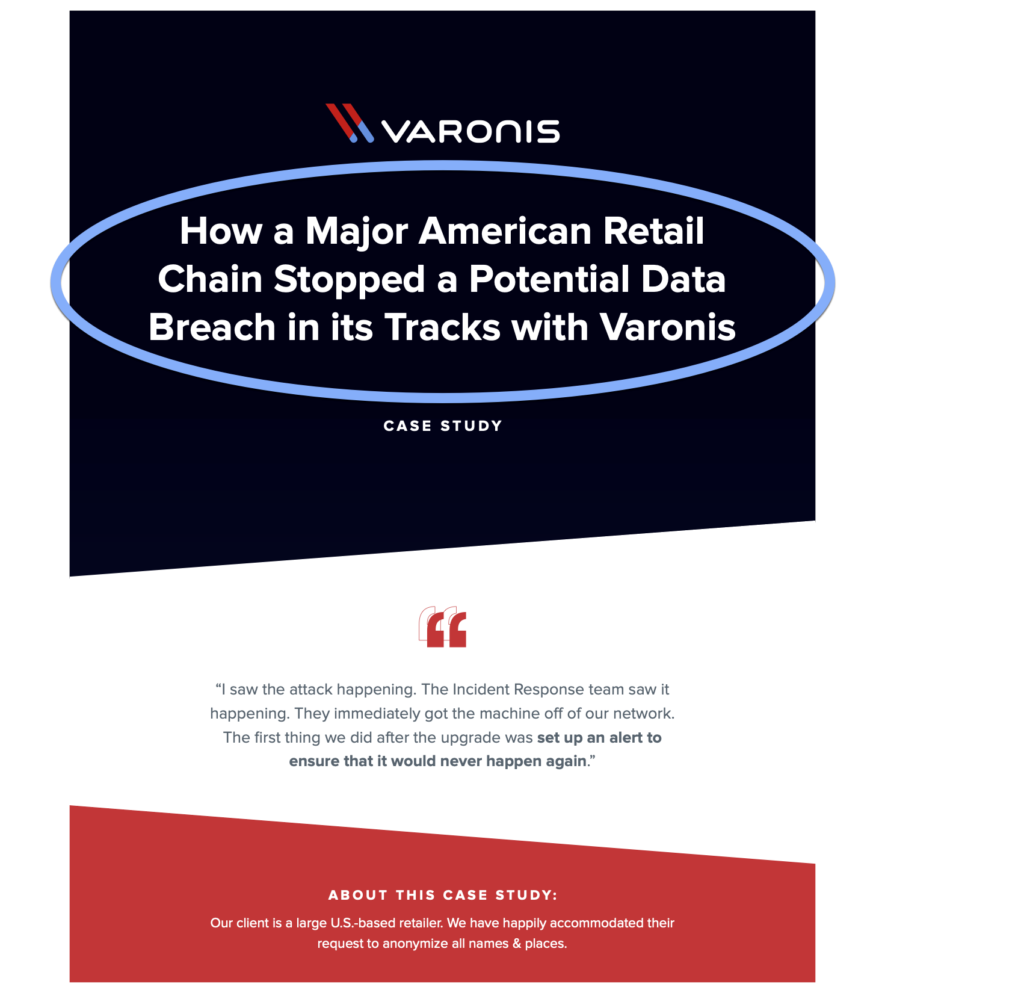 Our writer made this choice even though he had some great metrics he could have used instead.

Instead, he included those metrics in the second page sidebar (circled in blue) as well as in the text of the results section: 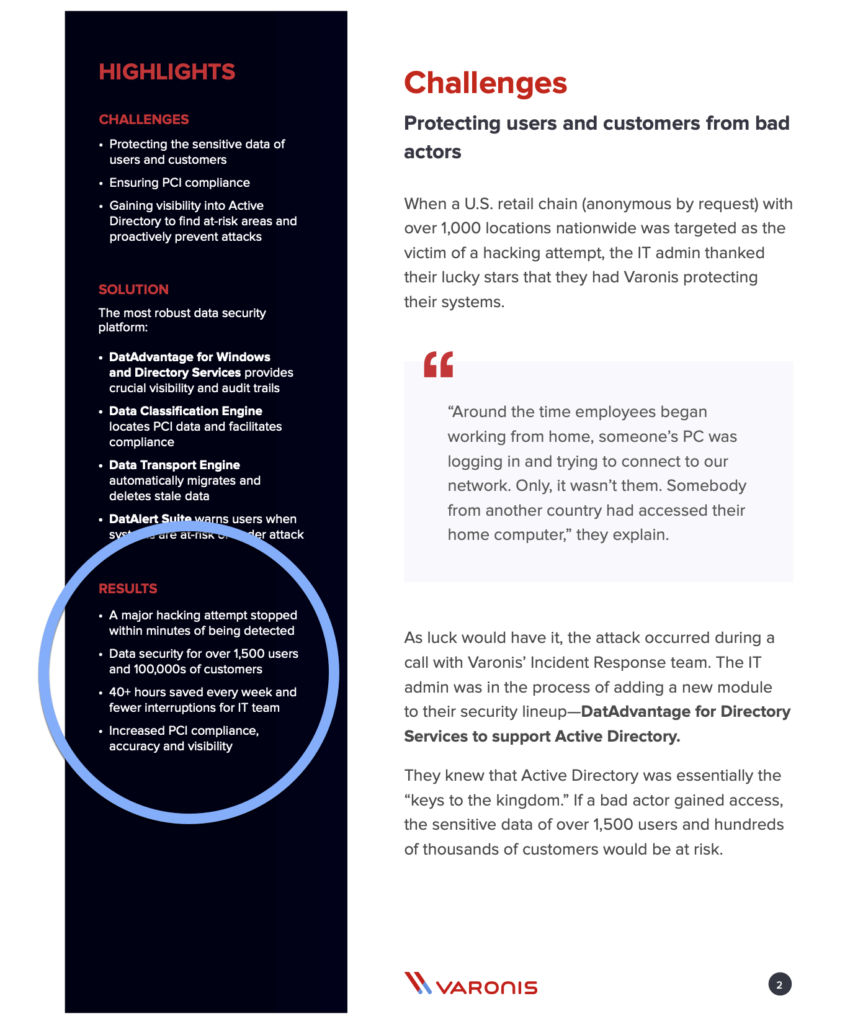 When we ran this customer success story by our client, they agreed that our chosen headline was the way to go.

It was simply much more grabby to the target audience for this customer success story than the other metrics we had in hand (even though those too were awesome!).

When it comes to customer success story headlines, there are no hard and fast rules

These are just a couple of examples of where we chose to craft headlines without metrics.

I’m sure there are other circumstances where we would make the same choice.

Still, using metrics remains the best way to go the vast majority of the time.

But the point here is to keep an open mind. Don’t get locked into any ONE way of doing things.

Think creatively. Focus on your target audience and goals.

And then use the headline that puts you closer to them.

Ready to put your headlines into the hands of professional customer success story writers?

Based in Vancouver, Canada, Holly is pumped to tell stories of companies succeeding and doing good in the world.

What do you do when you’re writing a case study with no before-after comparison? A case study where you have no insights into the situation that existed before your amazing product or solution was implemented? How can you create tension or suspense in your case study without that? Because when you distill most case studies down to their bare structure, the story is: Bad thing happens (or, is happening) Solution is implemented Problem is solved. But what if your interviewee...

Here’s a CRAZY clever bit of copy and UX that I wish more companies were brave enough to try: Our client, KlientBoost, has a fantastic amount of customer success stories—so many that they need to help prospects find the ones most relevant to them. So here’s how they’ve set up their “results” page: As you can see, they provide users with two types of filtering systems. The first system (which I’ve circled in blue) follows conventional wisdom (read: logic). Users...