Why Your Success Story Needs a Hero

“I never hear much about nature or dinosaurs or things like that. Maybe you should call your show Newsy things Considered, since I don’t get to hear about all the things,” he writes.

So what did NPR do?

They owned the oversight:

Y'all remember Leo and his point about our lacking 🦕 coverage? Turns out the word "dinosaur" appears only 294 times in our show's history. By comparison, "senator" has appeared 20,447 times.

For No. 295 we invited Leo to interview a paleontologist.https://t.co/hSixdwAxY3

In fact, they had Leo read his scathing indictment aloud on ATC episode 295.

They invited Leo to ask Ashley Poust, research associate at the San Diego Natural History, some questions about dinosaurs.

NPR One made a dedicated playlist just for Leo and any other NPR listeners (← This is important. Remember this.) who wanted more content on, specifically, “dinosaurs and cool things.”

Then Mary Louise Kelly wrote and published the story.

Instead of all this, NPR could have done any number of things:

None of those options would have been inherently bad or wrong (though some might have been a little insensitive). But none would have been noteworthy, either. We wouldn’t be talking about NPR if they’d quietly ignored Leo’s request or pushed out half-a-dozen new pieces about dinosaurs.

Instead, NPR turned this into a story… and they positioned Leo as the hero of that story.

Heroes are important. They give us someone to root for. Even better, they show us someone we recognize ourselves in. When that person—that reflection of ourselves—achieves success, it hits almost as hard as if we’ve achieved that success for ourselves.

Yet companies often forget this when it comes to telling customer success stories.

Many businesses are so focused on “the brand” that they sacrifice their hero on the altar of homogeneity. As a result, their “case studies” start looking color-by-number—unobjectionable but unremarkable regurgitations of the content that already exists on their sales’ pages.

If we inject a hero into those stories, we add stakes. We add drama.

It’s how we take an abstract problem, like “achieving business growth,” and transform it into something relatable like…

“While David was bursting with enthusiasm, he wasn’t blessed with much free time. With a busy insurance career and family life to navigate, he didn’t have the hours or the 360-degree knowledge of running websites to operate and grow the business alone.”

See, in this story, the goal is business growth, but the problem is personal: not enough free time or expertise.

Marian Schembari touches on this topic in The Copywriter Club Podcast Episode 28:

“I hate the term B2B, because businesses are human beings,” she says. “There is a human being reading your copy, and they don’t understand what you say when you talk about like, ‘Achieving business growth long term.’ What the hell does that mean?”

“Achieving business growth” is generic. It’s a milk-toast statement that everyone can agree that they want, but it doesn’t actually mean anything. It certainly doesn’t inspire action.

But a story about David, a family man and entrepreneur (who many people will read and think “Hey, he’s just like me!”), being able to spend more time with his family while simultaneously growing his business? That’s a result prospects will crave for themselves.

And this brings us to one of the most important lessons that every good copywriter already knows:

Your content isn’t about you. In case studies, it’s not even really about the customer you helped. It’s about the potential customer—the person reading your case study—that you want to help.

That’s the person you need to persuade.

Your content isn’t about you. It’s about the potential customer—the person reading your case study—that you can help.

So how do you choose the hero of your customer success story?

First, you need to understand that not every big win is worth a story. The story you tell should feature an example of your ideal client—the type of business you’re trying to attract.

Second, “more influential” might not mean “better hero.” For example, if you’re primarily marketing to and for SEOs but you interview the CFO of a company for your case study, they probably won’t have a lot of things to say that are relevant to your target reader.

Third, you need to think about the pain points you solve. Friction makes stories interesting to read—and it makes your hero more relatable! But if your hero’s primary challenge has nothing to do with you or your solution, then that person is not the best candidate.

Ultimately, the best hero is someone who relies on your solution day-in and day-out, whose pain you solved, and who now can’t envision life without your solution.

Now, notice that one quality I didn’t list was “someone who will let you use their name and title.” Why? Because, in a surprising twist, even anonymous case studies can have compelling heroes!

Take a look at this anonymous case study by Varonis: 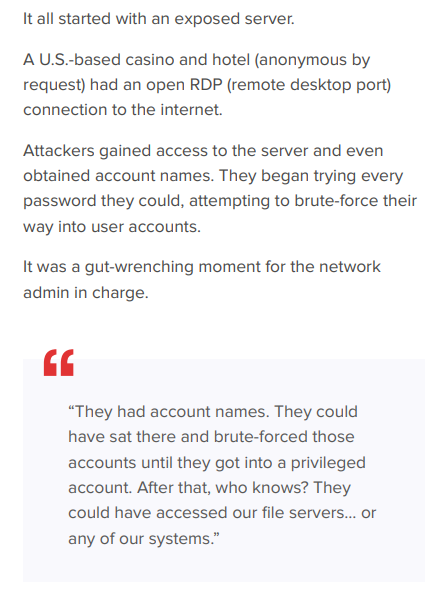 Even anonymous case studies can have compelling heroes!

In this case study, the hero is never named. All we know is that they’re a network admin in charge of cybersecurity. Despite that, we can feel the tension in this scene: hackers knocking at the door and a major data breach imminent. We can also feel the very real threat facing this individual. It makes us want to read more and learn how they solve the problem… what are they going to do?

This is the sort of nightmare scenario that other network admins want to avoid at all cost. So they’re going to read on to learn how Varonis helped this network admin stop the attack. They’re going to envision how much better life would be if they had this solution too.

Then, even if they’re not the person who pulls the trigger on new software purchases, they’re going to have a strong case to present to the person who is a decision-maker: Look at this company. Look at this threat they faced. That could be us. I don’t think we could beat it without Varonis.

Voila, you’ve turned your reader into a brand advocate.

And we know this strategy works because we’ve seen it work time and time again.

I’ll be the first to admit… I don’t make it to the end of every NPR article. But finding out if Leo is going to get more dinosaur-content? That kept me reading. I read that article start-to-finish. Then I listened to the episode. Then I started listening to their playlist about dinosaurs. And I’m not alone.

People flocked to social media to talk about Leo’s letter and NPR’s response. In under 48 hours, it’s been liked and shared tens of thousands of times—by authors, doctors, politicians, and everyone in between:

If anyone needs a pick me up, check out Leo and the dinosaur story on @npratc! I laughed, I aww-ed, I learned something new about #concavenators. Great start to the morning. Thanks @NPR 🙂

Leo’s a great hero: We get to know him—he dreams of being a palaeontologist his favorite dinosaur is Concavenator. He’s genuine. And he’s immensely relatable—I mean, who among us doesn’t want to hear more about “dinosaurs and cool things?”

That’s the thing about Leo’s story—it resonates with us. In solving his pain point and telling the story of that solve, NPR is speaking to their future listeners. They’re delivering the message that “we care about what you care about” loud and clear, and they’re creating future brand advocates.

This is smart long-term strategy: kids listening to NPR for the dinosaur stories will be listeners for life.

Do you need to find the hero of your story?

Or maybe you want a hand with the steps after that: scheduling interviews, asking the right questions, telling the story, getting sign off, or figuring out how you’re going to market it. (A good case study needs all of those things!)

All you have to do is head to your nearest floodlight and shine the ‘CSB’ logo in the sky on a dark and cloudy night. Or, if you don’t have one of those, you could just drop us a line.

How to Create Remote Video Testimonials and Avoid Common Pitfalls

Getting a great remote video testimonial takes a whole lot more than just firing up Zoom and pressing “record.” If only it were so easy! If you want a quality final product, here are just a few of the things you need to think about: Capture quality Lighting Framing Audio B-roll Tech troubleshooting Setting Captions and graphics Interview logistics Interviews 1. Capture quality Zoom (and most video platforms) will compress the heck out of everything they touch and make it...

How to Create Case Study Assets and Build a Winning Team

A deep, context-rich 1,500-word case study chalk full of customer quotes is GREAT…until it’s terrible. Because if you start rattling through that bad boy on a live call, your prospect is going to tune out. You’ve got the right idea, but you’ve chosen the wrong format. You need to deploy the right asset for the right situation. It’s the same in baseball. You can’t build a winning team with a roster that only includes left fielders, pitchers, or catchers. You need...

Who Should Conduct Case Study Interviews

A successful case study interview requires more than just a great question set. After all, you only have 30-60 minutes to capture a deep level of detail from the customer that will inform a strategic story. If you waste time rattling off questions like a robot, you’ll only get surface-level responses and miss the deeper story. Here’s what can happen if you don’t know what you’re doing: You can easily miss the deeper, more strategic story Your customer will hold...